The New Worlds of Isabela Calderón

“The New Worlds of Isabela Calderon is like a box of expensive Belgian chocolates, some with a hidden center, each to be slowly savored for its unique flavor."
Marion Vernon
The St. Augustine Record 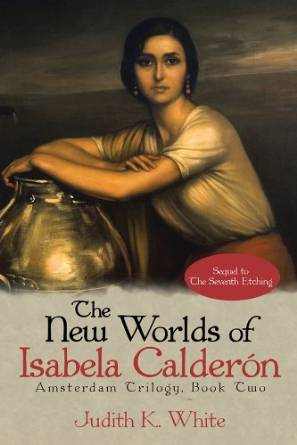 After surviving a shipwreck and finding her way to Golden Age Amsterdam, beautiful and clever but naive Isabela Calderón returns to her 17th-century Spanish village at age seventeen to fulfill the destiny her deceased father set in motion at her birth. When she finds her beloved childhood home altered and life with her husband unbearable, Isabela seeks solace from a healer cook, a mysterious, erudite tailor of unknown origin, and her husband's long-term mistress who hides a threatening secret.

Isolated and distraught when illness and the Inquisition destroy these precious friendships, she again sets sail - this time with her two children - to the New World towns of San Agustín and New Amsterdam. While serving as a language interpreter in a dingy jail cell, she reconnects with the engaging and attentive Dutch artist, Pieter Hals, with whom she spent a memorable evening a decade earlier. At the time she was suddenly wrenched away from the Amsterdam orphans in her care, Pieter had begun painting her portrait. Now when the possibility of a renewed and joyful relationship looms, while the unfinished youthful portrait beckons from its attic perch across the sea in Amsterdam, obstacles and self-doubt continue to block Isabela's path to self-fulfillment and happiness.

"While the adventures and challenges Isabela Calderon undergoes form the framework of her story, author Judith White has enriched the tale with insights into the cultures, customs and religions that dominate life in the late 17th century."